Hoo-boy, what a month it has been.

Folks, starting a school year with elementary-school age kids, AND a new job, AT a new school, when it’s the first time both your wife and you have ever worked full time?

I am incredibly blessed to have all these opportunities, but I do not deny that it has been frantic and hectic. Good, but not relaxing. And some things have suffered.

This blog is definitely one of them. But I’m starting to be able to bring it back.

Over the past week, I have been fixing and improving book links. My new books are available over on the right sidebar: $3.99 for ALL THINGS HUGE AND HIDEOUS and $2.99 for THE GIRL WHO WASN’T THERE. In addition, if you want a taste of each, I have brand NEW SNIPPETS UP FOR EACH ONE in the SAMPLE SNIPPETS link above.

I hope to have new snippets up soon. Also, I have confirmation that I have sold a new short story: no shit it’s a CHOOSE-YOUR-OWN-ADVENTURE LOVECRAFTIAN NIGHTMARE. Never thought I’d sell it, but Stupendous Stories has picked it up!

Thanks for reading, friends.

Greetings, loyal readers! A week from now, I’ll be in Atlanta! Please stop by and say hello at my panel:

Title: Bringing More Seats To The Round Table: Diversity In Medieval Stories
Description: Arthurian legend was great for slaying dragons and creating Damsels In Distress. But we want the damsel picks up a sword and save everyone else. Join our panel of authors as they discuss the White Knight trope, fix Arthur’s round table and share their favorite non-traditional medieval era tales.
Time: Fri 01:00 pm Location: Augusta – Sheraton (Length: 1 Hour)
(Tentative Panelists: Milton J Davis, E.K. Johnston, Tony A Ballard-Smoot, Esther Friesner, G. Scott Huggins)

Unfortunately, I have just learned that my second panel, ALL THE SUBS, is scheduled to begin 25 minutes before my flight leaves on Monday, and I will NOT be able to attend unless it is rescheduled.

Finally, I will be at Bard’s Tower in the Dealer Room, helping to sell many fine books including, of course, ALL THINGS HUGE AND HIDEOUS. Please stop by and say hi!

So, two weeks ago I announced that there would be a drawing amongst people who shared the news of the ALL THINGS HUGE AND HIDEOUS release within 24 hours online for a FREE Kindle copy of the eBook. And now that I am back from vacation I am able to announce that the winner is…

ANDREW WOODS! You’ve won a free copy! Get in touch with me on social media, that I may reward you!

Hello, loyal readers. Time for a little bit of news.

I have been kicking out this blog on a more-or-less 3x weekly schedule for the summer. Due to the impending start of school and a family vacation, I am going dark on this blog until at least August 12. And I think I’m going to have to cut back to 2 blogs a week. Enjoy the rest of the summer, fam. And please spread the word about ALL THINGS HUGE AND HIDEOUS, now out in paperback. 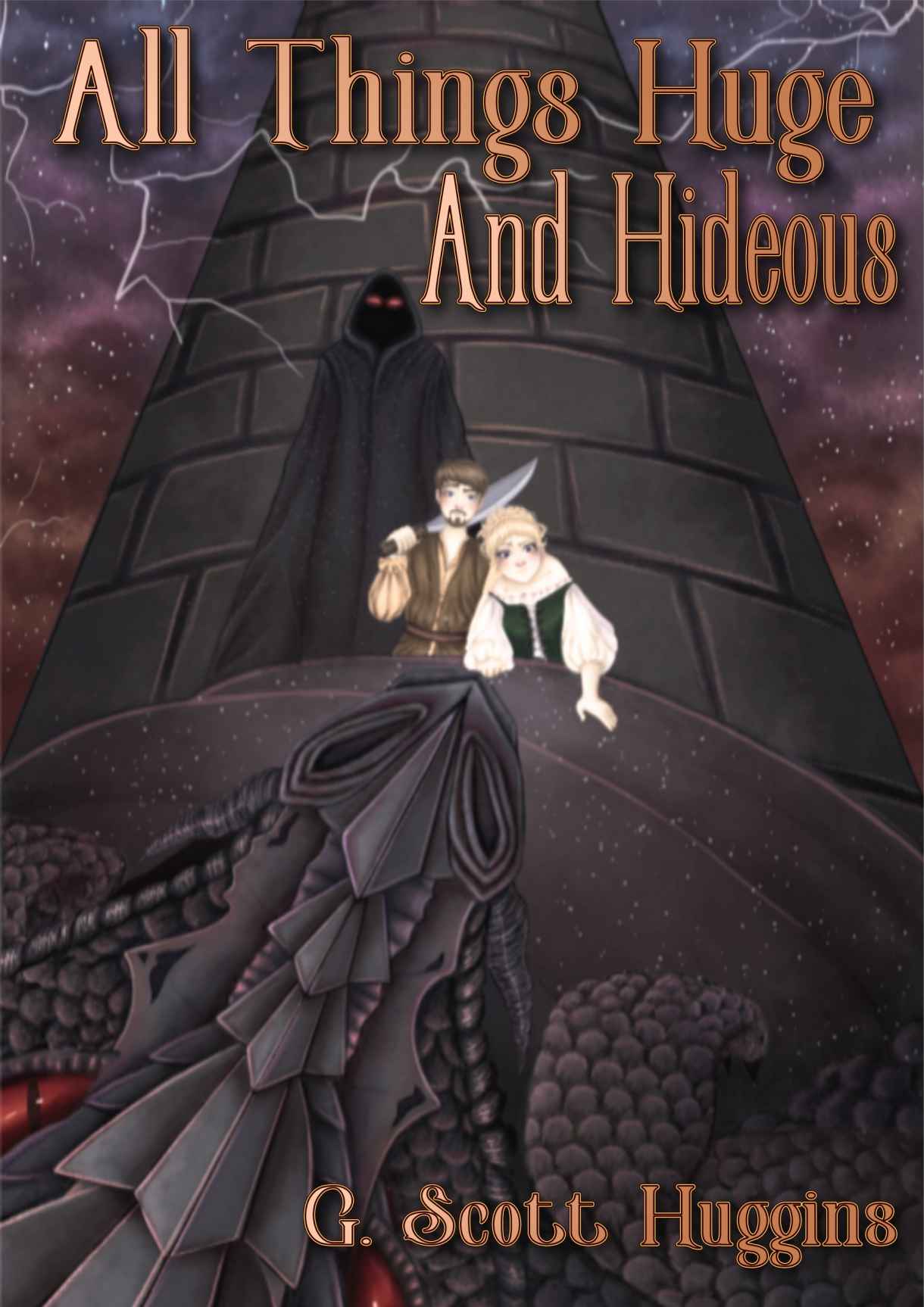 “A rollicking adventure that hits all the right notes.”

Yesterday, a dream of mine came true. I became a published novelist for the first time. All Things Huge and Hideous has been released in Kindle format. Sometime before September, it will be released in print format as well.

I’d like to thank all the readers who have made this possible, as well as Jason Rennie, my publisher and Superversive Press. Special thanks also go to D.J. Butler and Chris Ruocchio whose blurbs are above.

Now, I’d also really love it if folks would spread the word, so for the people who share this on Facebook, or Twitter, or even better, reblog it TODAY, I am going to put your name in a drawing to win a signed copy of the book! Make sure to tag me if you post it on Facebook or Twitter. If you do it somewhere else where I’m not a member (like Instagram or Twitter) then please shoot me a note on my Contact form with a link so I can see it. This offer is only good for the next 24 hours, starting at 7:00 am CDT July 27, 2019!

Well, this is a post I’ve been working toward for a long time. Just got word that Superversive Press is ready to release ALL THINGS HUGE AND HIDEOUS in the next 24 hours. Links will appear when I have confirmation of their code transmission. It is my first full-length novel, a dark fantasy comedy chronicling the misadventures of Dr. James DeGrande and his assistant, Harriet Templin, pressed into the service of the Evil Dark Lord of the World.

I made myself a promise a couple of years ago, that whatever else happened, I would not let my 45th year go by without publishing a novel, one way or another. Today (or perhaps tomorrow) by the grace of Christ, that promise is fulfilled.
There are so many people I have to thank for this moment, I’m going to screw up and forget some of them, so if it’s you, you have my deepest apologies. First, I’d like to thank Jason Rennie, my editor, for doing the hard work of getting this ready to launch before Dragon Con in a month. If you’re there, please stop by. I’d like to thank many beta readers, especially Ralph M. Seibel and Jon Miles for their time reading the manuscript, and valuable tips. Cedar Sanderson and Jim C. Hines for encouragement and time on their blogs when the first part of this book was out as DOCTOR TO DRAGONS. I also thank Christopher Ruocchio and Dave Butler, a couple of much more established writers, who took the time to blurb this book. Great thanks go to my wife, Katie Huggins, who endured — as most writers’ spouses endure — endless moping over quality and the tapping of keys in the background. UNlike most writers’ spouses, however, she also endured being relentlessly questioned about the ailments and habits of various animals so that I knew my veterinary medicine wasn’t completely laughable. And finally, special thanks and honor go to George and Linda Huggins, who made this series possible by introducing me at a young age to both contemporary fantasy, AND the books of James Herriot, MRCVS, without whom the eponymous tales of James and Harriet would never have come to be.

Short blog post today. I am happy to announce that All Things Huge And Hideous has been returned to the publisher for edits.

I less pleased to announce that my laptop is limping along sadly due to the catastrophic failure of its battery, and it is now effectively a desktop until such time as the new battery arrives. Oh well.

Okay, so the blog has been on a sort of soft hiatus for about a month now, for various reasons, and I have high hopes that is coming to an end. I’d really like to thank everyone who’s stuck with reading it. The hiatus happened for various reasons, exciting and mundane, including…

The End Of The School Year: Yes, with three children in elementary school, this process requires a bit of readjustment to the way the house functions, so I’ve been transitioning back into the role of Full-Time Dad.

Next School Year: Just to complicate matters, I once again have a Real Day Job. I accepted a position with a local private school teaching World History, a job I truly love. So while that’s a lot of fun, transitioning to that new job takes a LOT of time.

DragonCon: In the interim, I have learned that I will be an Official Guest of DragonCon, appearing on at least two panels and probably more. In addition, I will be hanging out at Bard’s Tower signing copies of my forthcoming book All Things Huge And Hideous, from Superversive Press! Stop by and say hi!

More Professional Sales: Also, I have been polishing up my short story “Whoever Is Not For Us” to appear next month on Kristin Janz’s and Donald Crankshaw’s Mysterion website,and just sold (of all things) a 76-word short story to Jaleta Clegg’s anthology Beer-Battered Shrimp for $5, which works out to 6.5 cents a word!

More Unprofessional Sales: While it’s not a pro sale, I also received news a couple of weeks ago that StarShipSofa, one of the most prestigious semi-pro markets out there, and one I have never cracked, has bought one of my original stories, “Wheels-Up Time.” So that’s awesome news, and I’m honored to be working with Jeremy Szal.

So a lot to be grateful to God for, and hopefully, we’ll have some more Dear Stabby and things coming up later.

Well, it’s been awhile since I mentioned this, partly because there was a bit of a learning curve in how to do it, but I now have a fully-functional mailing list, and I want to welcome everyone with a FREE copy of Doctor To Dragons, which is effectively the first three chapters of the full-length novel All Things Huge And Hideous, which will be coming out from Superversive Press this fall.

Honestly, I really love being able to do this, because this gives my readers a chance to preview the book at no risk. If you don’t like Doctor, you probably won’t like All Things Huge and Hideous, and I really don’t want anyone to spend money on something that disappoints them. But if you do like it, then I think you’ll be confident that the money for the full novel is well spent.

To get your free copy, all I ask is that you sign up for my mailing list, which you can do right here! It will come out on the first of the month and on very special occasions (like, I’m appearing at a con or I’ve sold a book), so I won’t be spamming you. Hope you enjoy the ride.

So for a long time, now, I’ve had a CONTACT THE AUTHOR page set up on my blog. And now it’s time to kick that into high gear, because it’s time for a NEWSLETTER LAUNCH!

That’s right, I’m finally going to do what so many awesome authors are doing: send out a monthly update on all my fiction news!

And just as an incentive to get people to sign up, AND to give everyone a little taste of what’s coming, everyone who signs up gets a free copy of the DOCTOR TO DRAGONS ebook!

So come on! What have you got to lose besides your minds? To sign up, go to the CONTACT THE AUTHOR section and send me a note, making sure to check the box saying that you’d like to be added to a mailing list. And by next week, you will have your FREE ebook!