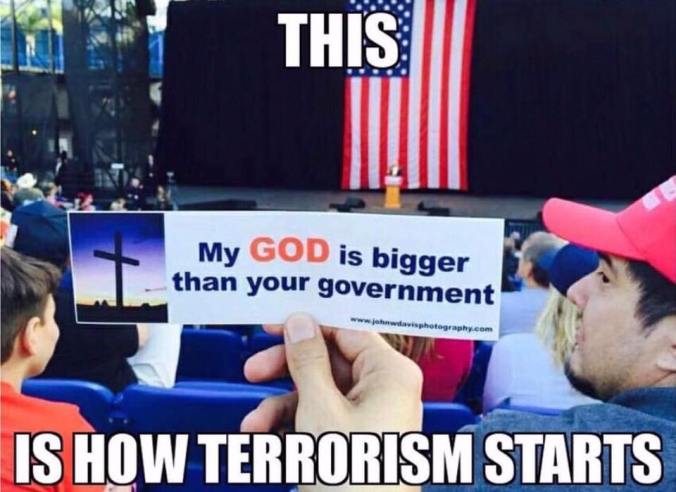 As Samuel L. Jackson’s character tells us in the movie The Long Kiss Goodnight: “When you make an assumption, you make an ass out of ‘u’ and ‘umption.'” Making an assumption about human motivations is always dangerous. One of the greatest causes of the deep political divisions of our nation today stems from the belief that we can tell what our opponents “really want.” People who are pro-life don’t care about babies, they really want to make women second-class citizens. People who want gun control don’t care about safety, they really want to establish a tyranny.

The meme above is a perfect example of this in action. What does the bumper sticker say? It says that God is bigger than government. One would hope, of course, that He is. Given the almost legendary incompetence of governments in general and the United States government in particular, worshiping a God that was not bigger than the government would be a waste of time. Quite frankly, if that were the case, I’d leave the church and begin worshiping my cat. At least that way I would occasionally receive the blessing of snuggles. The worst, really, that you can say of this particular bumper sticker is that it says my God is bigger than your government, giving some cloak of innocence to the voter who displays the sticker, as though he or she were not equally culpable in the mess. If that is what is meant, then the believer is guilty of some degree of hypocrisy, yes. But terrorism?

There are really only two ways to get to the claim that this sentiment is “how terrorism starts.”  One is to automatically assume the worst about people. We’ve already seen why that’s a bad idea. But of course, there is a far more dangerous basis for making the claim, and I suspect that it is this idea that stands behind the meme: it is the idea that the entire concept of something bigger than the government, something bigger than unified human action (because that is what a government is, when boiled down to basics) is equivalent to terrorism. And that, I suspect, is the real motive of whoever created this meme. And yes, before anyone else points it out, I will save you the trouble and admit that I too may be falling into the trap of assuming the worst of my opponents. But whether the makers of the meme intended it or not, this idea is out there, and it is dangerous.

It is dangerous because it cuts right to the heart of the binary between theism and atheism: either there is a God, a Being that holds the absolute truths of existence in an unshakable grip, or there is not, and human desires and concepts are the ultimate determiners of right and wrong. If that latter is indeed the case, then God the Father is a lie, and must be replaced by human values. And herein lies the irony. The very concept of the God-King was rejected during the Fall of the Roman Empire, perhaps one of the few true advances in human thought during that decadent and hopeless time, when the Divine Augustus gave way to the servant of the Divine, Constantine the Great. But the atheist must replace the servant of the Divine with humans who, if not gods themselves, wield all the authority of God to determine what is right and wrong with the force of law; God the Federal Government. Therefore, it must follow that if this is true, people who believe in a God that is greater than the government are not only delusional, they are blasphemers. They are heretics who believe that something more, and something better than God the Federal Government exists, and therefore they are equivalent to terrorists, who will dare to defy the Holy People’s Will in the name of their ridiculous God. And of course, they will have to be suppressed for the good of the people.

This bumper sticker is not how terrorism starts. It’s quite possible to believe that God is bigger than the government and not need to undertake any violent (or even non-violent) action against the government. This meme is how fascism starts: the belief that no idea can challenge our secular lords and masters without being a threat that must be destroyed and criminalized.

From Somewhere In Orbit