Hey, want to win an anthology with a bunch of awesome stories, including my latest, “Day Of Atonement?” 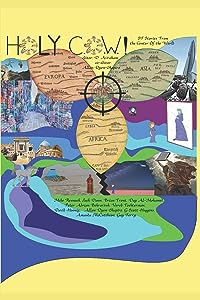 Just enter at this link, right here, on Amazon!

And now, a teaser:

Rabban Shimon and Rabban Hillel each took hold of one of the thick doors leading inward and pulled it aside. Yossef entered.

The room was just as unimpressive on the inside as it had been on the outside. It was no larger than a small house, from which all furnishings had been removed. In the northwest corner, a steep staircase descended into thick darkness. The only thing in it was a wooden table, tall but only about a cubit square. On the table lay a perfectly ordinary knife. Across from him, looking slightly stricken, was Matthias, and standing by him, the Bishop of Jerusalem, with his Chief Elder.

The Bishop, a thin, spare man with a curiously rounded face, bowed slightly from the waist. “Peace be with you, Rabban Hillel and the followers of the Law. I greet you in the name of Iyesos Christos, the Rebbe Melech HaMoshiach, and of St. Nicodemus the Rav Nakdimon.”

The Nasi returned the bow. “Peace be with you, Bishop Konstantinos and the followers of Y’shua. I greet you in the name of the God of Avraham, the God of Yitzchak, the God of Ya’akov, and of the Elder Gamli’el of blessed memory. Give thanks to the God of gods.”

“His mercy endures forever,” the Bishop answered. “Today, September 30th, in the Year of Our Lord 635, we present for ordeal before the throne of the Father, Matthias, a novice whom we would ordain a priest of Iyesos Christos.”

“And today, on the 9th Tishrei, the year 4395, we present for the ordeal before the throne of the Most High, Yossef, whom we would ordain a Rabbi to teach the Law. Let His Will be revealed as it has been since the time of Y’shua, and the time of Moshe.” And he withdrew from his robes a box of acacia wood, polished with age. From it, he drew two stones.

Yossef swayed where he stood, and he thought he heard Matthias gasp. Surely the Urim and Thummim had been lost in the time of captivity. He dared not speak, but stared at Hillel. But it was Bishop Konstantinos who spoke. “They are not the ancient relics of Israel,” he said kindly. “But they serve the purpose. As once we cast lots to determine the successor to our Lord’s betrayer, so we now cast them, that we may know the Will of God concerning you.”

Yossef’s vision darkened and his breath quickened. This was the secret of ordination, then? No wonder they kept it a secret! He felt as though he were in a dream. God is present in this room, he thought. It was too big to take in.

“We ask the Will of God concerning these men.” The words and the action cut across Yossef’s reverie. Konstantinos and Hillel cast their lots into the wooden table. The rattle of them echoed off the walls. Yossef stared. They were inscribed with ancient letters whose meanings he could not guess at. The Bishop and the Nasi gazed at them for a long moment. “The Will of God is that the disobedient should perish,” said the Nasi, and his voice was dead in the air.

“This is the Will of God,” echoed the Bishop.

The disobedient should..? What did that mean? Yossef turned to ask, but the men had the stones in their hands again, and the Bishop intoned, “We ask the Lord to reveal the disobedient.” The lots spun through the air as one and rattled in their tray. They gazed upon the stones. “The disobedient is the Jew, Yossef.”

What? No, that couldn’t be!

“The disobedient is Yossef,” the Nasi repeated, and he looked old and shaken. “Blessed be the Name of the Lord.”

“Rabban Hillel,” breathed Yossef. “What have I..?”

The older man gripped his upper arm with surprising strength. “You must be silent, Yossef. This is the Will of Adonai, which you swore to obey.” Yossef stood as if paralyzed. He had sworn. Sworn to obey the Will. Sworn by the Name.

Bishop Konstantinos approached the table. To Yossef’s distant surprise, he left the stones on the table.

He picked up the knife.

Moving swiftly, he pressed its hilt into Matthias’ hand.  “Do it quickly, son.”

Matthias’ face was a mirror of Yossef’s own. “Father, I don’t understand.”

“This is the ordeal of ordination. You have sworn by Christ to do the Will of God as it is revealed to you. Do it quickly.”