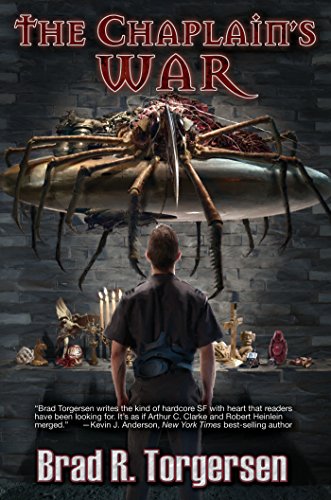 I had the privilege of meeting Brad Torgersen for the first time at this year’s DragonCon. I had known him online for several years, and he was gracious enough to agree to blurb my book, All Things Huge and Hideous earlier this year. He was also very (needlessly) apologetic that the blurb had not worked out. (It was just a matter of bad timing; Brad had been deployed for a very long time, and my request came as he was finally getting to come home. A lesser man wouldn’t have even tried to help me out). But I appreciate Brad’s service even more than the blurb.

At the Baen Roadshow, Brad was also giving away copies of his debut novel, The Chaplain’s War, along with his soon-to-be-Dragon-Award-winning The Star-Wheeled Sky. Because I’m a rather obsessive person, I elected to take a copy of The Chaplain’s War, which Brad signed for me.

So on the flight home, The Chaplain’s War was my reading, and all I can say is, it wowed me. It reminded me of nothing so much as one of my early-adulthood favorites, Ender’s Game. Only it seemed to me to reach more deeply into a question that Orson Scott Card didn’t get to until the sequel Speaker For The Dead: How do you make peace?

The story itself is a bit reminiscent of Ender’s Game. It concerns humanity’s war with the mantis-cyborgs, a race much more technologically advanced, and controlling a much larger stellar empire. In fact, we learn early on that the mantes have already exterminated two other intelligent species, and there seems to be no reason that humanity would not become number three on their list. But that all changes when an alien Professor has a conversation with  Harrison Barlow, the Chaplain’s Assistant in a mantis POW camp. The mantes have no concept of God, and the Professor wishes to understand this strange idea that all three of the mantes’ victims have shared.

What follows is an intricate but action-packed story of humans and aliens working together and fighting against each other to survive. In fact, it occurs to me that this is Ender’s Game meets Enemy Mine. Interwoven through the story of Barlow’s capture by and eventually his diplomacy to the aliens is the story of how he became a soldier and a chaplain’s assistant in the first place.  It’s a story that masterfully blends questions of faith and honor together through a cast of beautifully real (and flawed) characters.

I can hardly wait to find time to get to The Star-Wheeled Sky and its eventual sequel. And I’m honored to count Brad Torgersen as a friend and supporter.